One Way Dungeon
A game for the Weekly Game Jam 92
Theme: One Direction

A very short game(?) where you walk in a dungeon. Its really not much of a game, and more of a proof-of-concept of a very strait-forward dungeon game. I think it has potential and I will hopefully work with it more "soon".

As for this game itself, it's still nice to see you do 3D games. I like seeing such a different style and how your art style and direction is applied to 3D as it can be. This game does a nice job being what it is with its creepy atmosphere and off-settling nature, but it's not an inherently super compelling. The movement is claustrophobic and serves the mood, but it's also really slow and confining in a not fun way, and if this was expanded upon then my patience for waiting for the movement would wear thin. My favorite part strangely was turning: the slow, incremental turn, getting to see the nice wall textures up close, just this suspense and unease. It similarly would get very tiring if the game was longer and turning was needed, but for some reason I really liked it.

The colored diamond puzzle was too much thinking for me (at least right now at this hour...) so my solution felt more random brute force after like a dozen or two clicks than an intelligent puzzle solution I could feel proud of.

Oh! In playing through your games I've yet to remark how awesome it is that all your games are playable in-browser! That's just awesome. I wish all my games could be the same but it doesn't seem to want to end up that way; I'm going to try to focus on HTML-focused builds first. I always build my games for Windows initially when testing, and then when I make the engine port to HTML/JavaScript for in-browser play more often than not it gonks up severely and refuses to work. Your successful, consistent commitment to in-browser itch.io games is an inspiration to us all.

Also, when your browser games started being able to maximize too, that was awesome. I super appreciate that.

Having sound options too is neat, but unfortunately since they're always in a start menu that I can't access mid-game (as far as I'm aware for all the games of yours I've played like that), they can't be too useful. I don't know what the sound mixing will be like or if I'll get annoyed by the music after too many repeats and when I'll want to mute it until I play the game, and I don't want to quit the game just to rebalance the audio in the start menu settings. Maybe there were Escape pause menus with the sound options mid-game that I missed and my point is invalid, but that's been my experience thusfar. Still though, again, having sound options is still way cooler than those that don't do that.

Thanks again! Always so fun to see someone live playing the game :)

Not sure if you could pick up the key (I assumed the key and the door were the end of the game, because I couldn't get my camera in a position where I could click on the key).

Really cool atmosphere. Very creepy. The restricted camera movement and such feels very claustrophobic -- I can see it being pretty scary if an enemy came up from behind you. Maybe have an about face button as well since the turn around time is pretty slow.w

Took me a second to realize that the crouch was a toggle and not a hold.

The movement felt kind of awkward -- it'd be nice if it didn't stop if you held down the button and continued to the next location without slowing down. I could see it getting annoying getting around if the game was significantly larger. 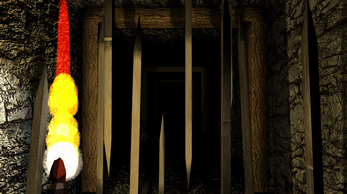 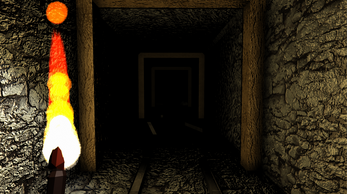 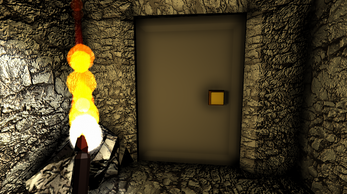